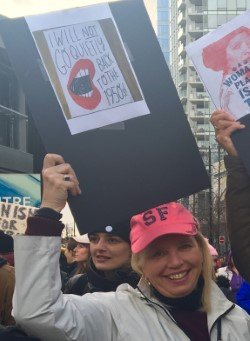 By Maureen McGrathJanuary 24, 2017No Comments

As I sat dressed in white to honour my suffragette sisters before the Women’s March on Washington-Vancouver on Saturday January 21, 2017,  I glanced out the window and saw “person zero” , a man of colour, briskly walking carrying two signs and my heart skipped a beat.  Here they come.

And come they did. Thousands of of sign-carrying, pink pussy cat hat wearing women and people of every gender, colour, creed, size and shape came on that fateful day. More came there than at the inauguration but that may be an “alternative fact.”  Hello Kellyanne Conway.

From Bowen Island to Burnaby, Steveston to Surrey, Poco to Pomo, Vancouver you came together at Jack Poole Plaza. The undertone, a peaceful resistance, juxtaposed with misogyny; a sexist demagogue elected to the highest office in the land. The air was one of peace and love, support and solidarity, a unified tone spread like butter on hot toast and we were comforted if only for a few hours,  a sharp contrast to the reality about women.

Women do not always stand in solidarity. Gossip. Exclusion. Breast vs. bottle feeders. Stay at home moms vs. working moms. Pro-choice vs. Pro-life. We have our work cut out for us. The walk, set against the majestic North Shore Mountains an overwhelming reminder the heights we must climb….together.

The messages were creative and clear:

“We are not ovary acting.”

“We are not going back to the fifties.”

I asked women why they walked.  Many were afraid to say. Others needed affirmation that they sounded OK after they “spoke up.”  In an era of “alternative facts” (aka lies) women need to find their voices and have confidence in what they say. Part of that confidence is a solid understanding of the issues.

One of the first women I spoke to told me her ex-husband wouldn’t allow her to bring her ten-year old daughter to the walk, concerned about safety. Is there a safer place on earth than a mom’s march? Do women realize how much we are controlled by men?

From novices to nannies and little ones sporting feminist t’s who’d made marching their mission, stories of discrimination, pay inequity, reproductive rights, concern for US sisters, Planned Parenthood, walls, unfair immigration policies, NAFTA and peace in the Middle East were shared.  Many wanted to teach their sons well.

One man asked me why I walked. My pink hat had “SF” on it, and he assumed it stood for San Francisco. We are “so…you know what” I replied. He laughed but it’s no laughing matter. We cannot allow President Trump’s policies to succeed and here’s why.

This poppycock is contagious. If President Trump does well that means bigotry succeeds along with unfair immigration practices, anti-Muslim attitudes, discrimination, protectionism, poor environmental practices and antiquated reproductive policies. The dismissive view of sexual assault will spread like an infection not only to other countries but within our own.

Children learn what they live and little boys can say to girls, “I can grab your pussy.”    Forget any lives that matter. Only white boys and angry old, wrinkled white (dipped in orange) men born with a penis in hand will matter.

This extraordinary march was mindfulness on steroids due to the injustices that occur to women at home and abroad. Women are not going to take it anymore.  Hopefully this walk re-awakened women to the horror of our very own missing and murdered women the ravages of female genital mutilation, child brides, honour killings for homosexual acts amongst women or infidelity, arranged marriages and the fact that many girls and women in the world today are not allowed to go to school, vote, drive, choose an outfit or breastfeed or…or…or…

……have access to safe abortions worldwide. According to the World Health Organization, “21 million women have unsafe abortions in the developing world which accounts for 13% of all maternal deaths.”

So on January 23, 2017 President Trump signed an executive order ,”The Global Gag Order”, a federal ban on U.S funding of international health organizations that provide counsel to women about family planning that includes information about abortion.

Surrounded by the white “wingmen” of a similar vintage, two days after his inauguration, President Trump penned this executive order 43 years and 1 day after the Roe. v. Wade ruling, the landmark case that gave women access to abortion and two days after millions of people had turned out to protest just these kinds of restrictive reproductive policies because they basically screw women.

Re-instating the “Global Gag Order” will restrict services in clinics and force some to close their doors, impacting much needed HIV education and support for girls and women. What this executive order won’t do is put an to end abortion as the need for abortion won’t just disappear. More women will die.

This is not a time for cat fights. These restrictive reproductive policies threaten the health and welfare of girls and women and have far reaching consequences for pro-lifers and pro-choice women alike. The Women’s March on Washington IS a movement indeed. But it is also a time for discourse between the 53% of white women who voted for Trump and the Black (94%) and Hispanic (68%) women who voted for Hilary.

We can’t make women come first if women don’t come together first. Change may not happen in our lifetime but we must continue the work of our mothers and grandmothers. A woman’s work is never done but begins by welcoming all women into the fold. That reminds me…..I have to fold the laundry. We are more alike than we are different ladies, so come on!

Maureen McGrath is host of the Sunday Night Sex Show on News Talk 980 CKNW,  feminist, women’s health expert and a 2016 TED speaker on the Sexless Marriage. Her book is available on Amazon.ca : Sex & Health: Why One Can’t Come Without The Other