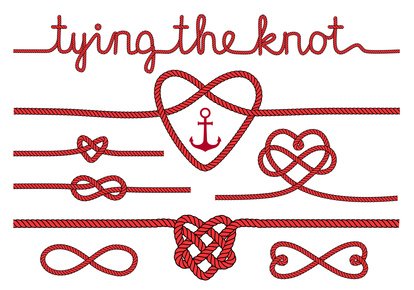 Tying The Knot After The Wedding

When we think of “tying the knot” getting married comes to mind. Knots have been associated with getting married since the dawn of time; it is believed that the expression stems from the nets of knotted string that supported mattresses before metal and wood bed frames, the theory being that, in order to create a marital bed you needed to “tie the knot.”  Of course, this could be an urban myth but it makes for a great bedtime tale!

Actual knots have been used during wedding ceremonies in a tradition of tying the wrists of brides and grooms together as a symbol of everlasting unity.  Blue knots tied to a bride’s wedding dress in the seventeenth century were to be removed by wedding guests and worn on men’s hats to bring on good fortune.

Although knots have been associated with getting married, they are less associated with marriage except for a lucky few.  This is unfortunate given that the number one fantasy for a woman is to be lightly tied up (i.e. hands tied behind her back or wrists tied to a headboard).  A woman may never share her fantasy with her man for fear of being judged by him even though he would probably love it (remember, women aren’t supposed to enjoy sex – RUBBISH!).

Many married couples become very bored in the bedroom sexually (women reporting more boredom) so tying knots after the marriage might just tie things up nicely.  Additionally, many people are nervous at first to fulfill their own or their partner’s fantasy because they do  “knot” know where to begin…

Getting Started with Bondage in the Bedroom

So, to help you get started, Frances Carleton, psychotherapist and counsellor from “down under”, and I discussed beginner bondage on the CKNW Sunday Night Sex Show.  Frances had a great idea for those couples who might want to try to tie one on. She suggested using toilet paper as a beginner rope.  It is quite easily breakable and provides at least something tangible for your fantasy without going too far.

Trust is key when using strings and things in the bedroom and a code word is vital.  Frances suggested using the words:

Respect is equally important when tying things up in the bedroom (or the kitchen, playroom, beach, wherever…)

Silk scarves are a nice material to use as it feels nice against the skin and slips on and off easily.  Frances thought that some women might not like to use their own scarves in case things get a bit too rough and need to be cut off (handy medical grade bandage scissors are a must when using anything other than toilet paper).

My thought is that a woman might purchase a few scarves of the same colour but different texture specifically for the tying the knot after the wedding.  The special scarves are only to be used for the purpose of playing tie me up at different times.  If one or two scarves need to be cut off, that is fine.  Once you and your lover have had your way with them (and each other), stitch all the scarves together for a fun fashionable “scarf of honour.”  It doesn’t matter that one scarf is shorter than another, that is the beauty of this one and only statement piece.

What a statement it is!  Your scarf can be as long as you like (the longer the better if you get what I mean).  Only you and your lover will know what wearing your scarf means and when isn’t it romantic when he grabs you by your secret scarf for a passionate kiss and you tie him up with it later.  You scarf ties you to your lover when you are apart. What memories!

For more information on beginner bondage and my fashion sense, I will be providing a workshop called “Fun With Ropes” at the upcoming Taboo Naughty But Nice Show here in Vancouver on February 5-7, 2016.