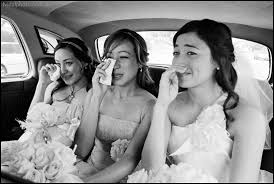 Say No To The Dress

By Maureen McGrathApril 27, 2017No Comments

Today Pam presented to my clinical practice because she had recently called off her engagement. Her tears were close to the surface and she needed to process what had happened. She fell completely in love two years ago with “Jack.” Tall, handsome and funny she was certain she wanted to spend the rest of her life with him.

Unfortunately, there were red flags that she consciously denied. Jack had big dreams but no job, unemployed for the entire time they were together. He wanted to establish his own accounting business but he had difficulty getting along with people. He drove fast in spite of her please to slow down and angered easily….over nothing. Then one day he crossed the line. He put his fist through the wall because she wanted to go away for the weekend with her sister.

Heartbroken, her dream of a fairytale wedding and life was shattered. She was not only grieving a man she loved, she was grieving the loss of the dream. At the age of 32, she thought she would never meet anyone ever. I told her that she made the right decision. Any man who angers easily and puts his fist through a wall has a problem, a significant emotional problem.

She was fortunate that she had the strength and courage to call of the wedding. Her friend by contrast was also miserable in her relationship, engaged to Philip. Philip also had an anger problem but Beverly his fiancé felt she couldn’t turn back. She’d said yes to the dress. The wedding was planned, invitations sent.

It is never too late to turn back. Her life will be plagued by her soon to be husband’s anger. Who knows what lies beneath but undoubtedly it is depression, anger, substance use and/or abuse or some combination.

Take Elizabeth, married to Tom for 15 years, he couldn’t hold a steady job and he had anger issues. Elizabeth was brilliant, a PhD in bioengineering, her brain was her most valued asset. One evening during one of Tom’s fits of rage, he lost it completely and came up from behind Elizabeth, attempted to choke her and proceeded to throw her to the ground.

Elizabeth’s 14 year old son came to her rescue, as her other two looked on in shock. He called 911 and Elizabeth was admitted to the hospital with a concussion. Dazed and confused, unable to string words together properly, she worried about her brain she told me, the whole time. Supported by people who loved her, she found the courage to leave this monster, the father of her three children. She was smart, she could fend for herself.

When women setting out on their life have red flags like anger in the men they love, marriage is a massive mistake. A wedding is a day but a marriage is meant to last a lifetime. Walking down the aisle knowing the man you greet at the altar may lash out for no apparent predisposes one to a life of misery.

A better, calmer, healthier man is out there and will come along. She now knows what she will tolerate and what she won’t. I told Pam with tears in her eyes that in one year from now she will look back and be so happy she didn’t marry an angry man. There are gentle wonderful men out there and she deserved one.

As for her friend, she risks the potentials for beatings and losing her brain as Elizabeth did. A bit of cold feet before a wedding is normal, but a major red flag like anger in the man or woman you are about to marry is not. Call off the caterers, cancel the wedding and say no to the dress!

Maureen McGrath hosts the Sunday Night Sex Show on News Talk 980 CKNW. She is passionate about raising awareness and helping to end male violence against women. Her TEDx talk on the Sexless Marriage has had over 2.3 million views. She is in private practice in North Vancouver and author of the book: Sex & Health:Why One Can’t Come Without The Other. She is Executive Director of the Women’s Health Initiative Network.