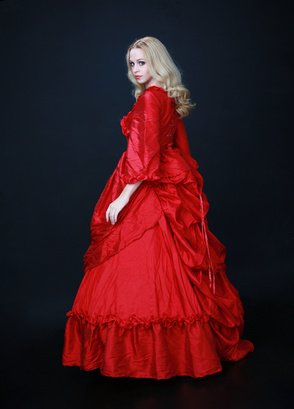 By Maureen McGrathFebruary 29, 2016No Comments

Looking back through ancient Irish history, it is said that the tradition of Sadie Hawkins Day began in 5th century Ireland when St. Brigid of Kildare bitterly complained to St. Patrick that women had to wait far too long for men to propose.

The legend says that St. Patrick decreed that women could propose marriage on this one day, February 29th, which only occurs during a leap year. I’m sure the women were thrilled.

This tradition also stems from another tale about St. Patrick and St. Brigid in which she drops straight to her knee at Patrick’s decree, instantly proposing to him. Patrick declined her offer – he was probably too busy saving Ireland from snakes – but he allegedly gave her a kiss on the cheek and a silk gown to soften the blow.

This, too, is dubious. Although many people believe that St. Patrick and St. Brigid met, and that she offered her vows to him, historically, Brigid would have been only nine or ten years old when Patrick died in 461 AD. If you believe he died later, however, in 493 AD, it may have been possible.

The tradition was then taken to Scotland by Irish monks.

Back in 1288, the Scots passed a law that allowed a woman to propose marriage to the man of her dreams in a Leap Year, with the law also stating that any man who declined the proposal on this day would have to pay a fine or provide a gift. The fine to be paid if a man declined the proposal ranged from a kiss to payment for a silk dress or a pair of gloves. In some upper-class European societies, the custom of denial involved buying 12 pairs of gloves for the woman you were rejecting. To hide her shame for not having a ring to wear, of course!

The law was allegedly passed by an unmarried Queen Margaret (although records show she may only have been five years old at the time).  She also put in place a rule that all those women proposing must wear a red petticoat while doing so.

Regardless of history, many women and men remain very traditional and believe it is the man’s duty to do the asking when it comes to dating, never mind marriage!  That’s where Hazel comes to mind. Hazel is a lively ninety-three-year-old patient of mine that I have been caring for for about three years who recently fell in love.

Hazel told me she had attended a dance on New Year’s Eve and a man had told her that she was a vert pretty woman. Although she was not attracted to this man, she said it made her feel very good. Hazel’s mother had taught Hazel that vanity was a sin so she never allowed herself compliments. But at ninety-three that had finally changed. She may not have been attracted to this man that complimented her, but she was attracted to another man, she confessed and quite frankly when she spoke of him, she beamed. I could see that look of love in her eyes.

Hazel described this man who owns the beauty shop where she has her hair done. She thought he must be much younger than her as he has jet black hair. I thought he could be her age, given his unlimited access to hair dye. Hair dye is one of the main reasons for younger appearances.  Hazel was blonde.

She said he flirted with her and made her feel like a teenager again. At ninety-three, she felt better about herself than she ever had.  When she saw her dark haired stallion, her heart skipped a beat. It was the first time she experienced sexual desire/attraction since her husband had passed away twenty years prior. I could see the happiness in her face. Her cheeks were aglow and her smile was big as her heart. Hazel wondered if she should tell this man that she thought he was handsome. Sexual attraction is something that just happens involuntary, regardless of age.