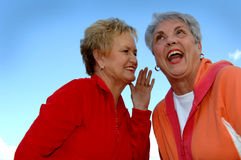 According to AgingInPlace.com, 20 million seniors aged 65 and older are single in the United States, due to various reasons such as divorce, separation or death. Seniors are at risk when it comes to isolation and depression. A big part of alleviating these symptoms is socialization. Being able to share hobbies and having frequent interaction with others is a great way for seniors to feel involved and it boosts their self-esteem as well. Whether it be romantic or platonic, it’s good to have something to keep you enthusiastic and looking forward to on a daily basis.

As technology is constantly being innovated, there are new avenues of connecting with others romantically at an older age. Yes, today, we’re talking about online dating for seniors.

Think you might like to try online dating? You’re not alone. According to the Pew Internet and American Life Project, from 2005 to 2008, the largest jump in adoption of Internet usage was by users ages 70 and older.

Nurse Next Door’s Thought Leader & Clinical Care Expert, Maureen McGrath will provide some insight into online dating for seniors, alongside basic tips if you’re interested in dipping your toes back into the dating pool

Bella lost her dear husband Joe after a long and very happy marriage and what seemed to be an even longer battle with cancer. She was delighted that she was able to care for her beloved Joe almost until the end when she needed the home care services of Nurse Next Door.

Bella was a tall, thin, sinewy writer. Athletic, she loved to go hiking, swimming and dancing. She appeared younger than her years and her spirit was so joyful.

It was two years since Joe passed and Bella’s daughter thought it was time her mom (at the young age of 82) met someone. Bella’s daughter was worried that her mom was lonely. Loneliness is a risk factor for mental health issues like anxiety and depression. It also increases peripheral vascular resistance which may increase blood pressure, placing a person at risk of stroke.

Bella was unsure about online dating and had questions. Was she too old for love? Who would want her? Would she ever meet anyone as wonderful as her Joe? Would she have sex at her age? She did confess she’d like to. But the biggest question of all was how would she meet someone?

Her daughter took care of that for her. She signed her up for online dating and created a profile for her. She giggled, “My daughter is so naughty!

I told Bella that no one is ever too old for love. It’s the one thing that binds us not only for a lifetime but over the lifetime. Why shouldn’t she meet someone, to go on long walks with or go dancing with or even make love with?

The next time I saw Bella she told me she had met not one, but two men! She met a man in her building just by chance. He was a big strapping man with Scottish good looks. His wife had passed away six months prior. He cared for her in their home until the day she died.

She met the other man online. They’d met for coffee. He was a kind man, thoughtful and reminded her of her Joe. They chatted for hours. They took a long walk by the sea. She found him very attractive. When they parted, he gently kissed her sweetly on the cheek. She was giddy like a schoolgirl when she told me about these men that she’d met.

There are some simple rules. Google “online dating for seniors”. Results will show some informative articles of things to consider and also online dating services or websites. Do some research on each one and choose one that appeals to you.

First and foremost, let people know a little bit about you. This is done through your online profile which is a summary about you and may include height, weight, age, marital status, education, career and what you are looking for in a romantic partner. Never disclose personal information like your address. Do include a recent photo doing what you enjoy. They seem to get the most views. This is a numbers game.

Be courteous, be cautious.

Always suggest you meet in a public place during the day. Confide in a trusted friend where you’re going. If you get a bad vibe from someone, politely tell them that you don’t think this will lead anywhere and excuse yourself.

Don’t get discouraged if romance doesn’t bloom in the first spring. The beauty of online dating is that you may meet new friends in addition to that romantic partner. Love is in the details!

Her TEDx talk on the No Sex Marriage has received over 17 million views.

She is also the Executive Director of the Women’s Health Initiative Network, an organization to raise awareness about women’s reproductive, bladder, vaginal and sexual health.

She is author of the book, Sex & Health: Why One Can’t Come Without the Other.

Maureen is the recipient of the 2009 VCH Nursing Excellence Award, a 2013 YWCA Women of Distinction finalist and the 2016 Vancouver Board of Trade Community Catalyst Award. Her website is Back To The Bedroom. Her blog is 50 Shades of Pink.