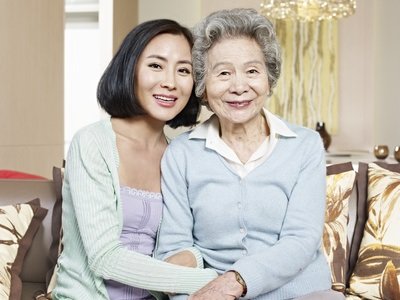 My Mother Told Me To Come! So Glad I Came For Repagyn!

I received a phone call at my office from a woman who said her mother listened to my program the CKNW Sunday Night Sex Show and told her daughter that she should speak to me about the vaginal dryness she was experiencing. I loved it! I was so pleased to learn that through my radio show I was able to educate a mother and that mother shared my teachings with her daughter. It is vital that women share stores to empower other women and girls.

MaryLou was a fifty-five year old post-menopausal women who was experiencing vaginal dryness. She went to her doctor after having no idea what was going on. Well, nothing was going on, because her vaginal dryness was severely impacting her sex life! Her painful sex was so bothersome that she said she had pretty much shut the door on intimate relations with her husband.

Her doctor did not offer much help.  She prescribed clobetasol as she said she thought this woman had eczema given her complaint of vaginal dryness.  The clobetasol did not work and this woman told me that her doctor gave up on her.

I suggested she see me in my clinical practice to have an internal exam and have her tissue inspected. As a registered nurse by training in the field of sexual health, I told her that given my extensive experience I am sometimes called the “vagina whisperer.” She laughed.

I told this woman that upwards of seventy percent of women experience vaginal dryness and it may occur at any time in a woman’s life.  MaryLou said she felt so much more confident knowing that there was help for her vaginal dryness and that she may resume her sex life.

When I examined MaryLou, I did a Q-Tip test first just to rule out provoked vestibulodynia – a painful condition where a woman experiences severe pain and discomfort in the vestibule area of the vagina. The vestibule is where the vulva (area of the skin on the outside) meets with the vagina. It is an extremely sensitive part of a woman’s body and contains the Bartholin’s gland (which produces vaginal lubrication), the urethra (where you pass urine), and a number of the small minor vestibule glands which also produce vaginal discharge.

With a negative Q-Tip test and no physical findings (although this is not necessary for diagnosis), I ruled out vestibulodynia. Upon visual inspection, I could see her labia was dry. With a limited internal examination, her vaginal tissues were pale and thin. With further inquiry, MaryLou also told me she experienced a number of symptoms of Genitourinary Syndrome of Menopause (GSM) (also known as vaginal atrophy). She has leakage of urine, recurrent urinary tract infections, post-coital bleeding, burning and itching.

Given the multitude of symptoms, I recommended she speak to her doctor about getting a prescription for low dose localized estrogen therapy in the form of a:

Since MaryLou was very frustrated and upset given the impact this condition had on her sex life and the fact that her labia was quite dry, I recommended Repagyn a personal moisturizer in the form of an ovule that is inserted into the vagian that contains Vitamin E, tea tree oil and Hyaluronic Acid (heals tissues).

Within one week MaryLou was feeling better and was very hopeful that her problem was finally diagnosed and being treated. The JoyGel worked almost immediately and she had her prescription for low dose localized estrogen in hand.  Seventy percent of post menopausal women have GMS and  only five percent are treated. It is a shame that more doctors are unaware of this condition because earlier treatment may have gotten MaryLou heading back to the bedroom with her husband much sooner.