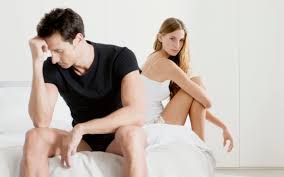 By Maureen McGrathMarch 6, 2019No Comments

She would have sex with him anytime. She was beautiful. She was the most pure & open-hearted woman he’d ever met. She was honest & genuine. She was light. They went to bed laughing. It was perfect.

Except for one thing……he had no sexual desire….for her. He hated having sex with her. But he loved her.

She didn’t turn him on. He didn’t think it would matter to a marriage, that sex thing. He cheated on her with a woman to whom he was attracted sexually but not intellectually or emotionally. He still carries a pain in his heart.

Why didn’t he want to have sex with her? Weren’t men supposed to want sex whenever with anyone? This is one of the biggest myths about male sexual health. Men desire sexual connection. Sex is hunger. Sex is physical. Sex is the way a man gives love. But he loved her. But men also need to be psychologically aroused. Without that, nothing is up.

In jest, I told him that if he combined those two women that may work. Did I possess magic powers? The platinum package perhaps?

For some reason & I say this tongue and cheek…..someone put marriage in the same bed with sex. There are the “marrying” kinds. And then there are those to whom we are sexually attracted. And sometimes the twain shall not meet.

He wondered if polyamory would work. Did he objectify her? Might this switch from the friend zone to the romantic zone? Maybe, but I wouldn’t bank on it.

He does fantasize about her. Human nature. We want what we can’t have. The brain plays tricks.

Tell her the truth about the lack of sexual attraction. Communication is as important as coming together.

Maureen McGrath is an RN in the field of sexual health. She hosts the Sunday Night Health Show and is author of the book, “Sex and Health.”