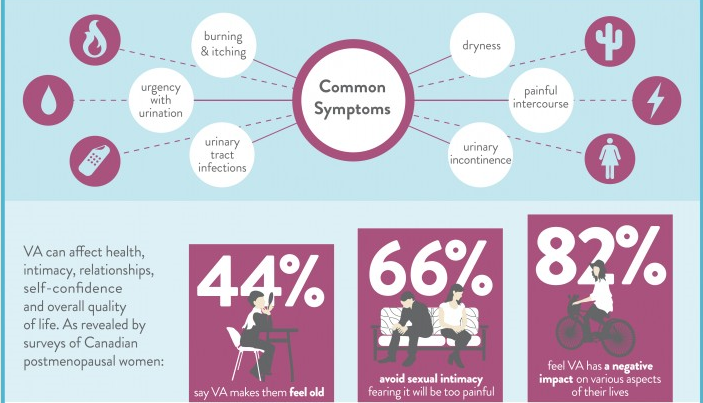 Is It More than Dryness? Know the Symptoms of Menopause You Can’t Ignore

By Maureen McGrathOctober 15, 2015No Comments

My friend Bob told me he recently heard me on the radio talking about vaginas again, and he laughed because “this time, he was grateful.” Bob said that he knew more about vaginas than he had ever hoped… because his wife was recently diagnosed with vaginal atrophy (VA), a common condition experienced during menopause due to estrogen deficiency.

Bob and Julia had been having marital problems because their once-great-sex-life had tanked.  Julia just didn’t want to have sex anymore and she would not tell him why. At first, she just avoided it or made one excuse after another, and finally she got angry whenever he made any sexual advances. He choked up when he discussed the impact it had on their marriage; Bob thought she was probably having an affair.

Then one evening he found Julia crying. She said that she was diagnosed with yet another urinary tract infection. It was her third or fourth in a year – he had no idea. It was at that point she told him that the last time they had sex, it was so painful she could never imagine having it again. She also said that after sex, she saw some blood on the toilet tissue when she wiped herself, and she was frightened because she was certain it was cancer.

He told me that because of listening to my show, he knew that vaginal health was important, that painful sex was common in women during menopause and most importantly, it could be treated. He encouraged his wife to go back to her doctor and tell him what she was experiencing.

Julia has since been diagnosed with VA (also called genitourinary syndrome of menopause, or GSM), which is the thinning, drying and inflammation of the urogenital tract and vaginal walls because of decreased estrogen.

This infographic, from StartTalkingVA.ca, is a great resource that outlines everything you need to know about VA:

In addition to vaginal dryness, painful sex, post-coital (after sex) bleeding and recurrent urinary tract infections – all of which Julia was experiencing – women may also experience thin watery discharge, itching and burning. Estrogen is the hormone regulator of the vagina; it balances the pH, keeps the tissues moist and prevents infection. Vaginal health is important for all women regardless of whether or not they are sexually active, and it is important that all women are diagnosed and treated properly.

So many women are suffering with VA, yet do not realize it because they are unaware of the symptoms. Women do not realize this is a condition that is easily treated. Many women try non-hormonal treatment options to help with the dryness, but it may not treat the estrogen deficiency, the root of the problem.

The Society of Obstetricians and Gynaecologists of Canada (SOGC) recommends low dose localized estrogen therapy to restore estrogen to the vagina and effectively treat VA. This is not the same as systemic estrogen therapy, an oral pill or a transdermal patch used for hot flashes and night sweats. Local therapy is topical and is inserted into the vagina in the form of a tablet, ring or cream and is minimally absorbed into a woman’s bloodstream. Julia decided on the vaginal tablet because it was less messy and odour-free.

VA is often the only symptom of menopause that, unlike hot flushes and night sweats, does not go away, and therapy is lifelong. My friend was so grateful that his wife received proper treatment for her VA and their relationship is back on track!

We need to open up the conversation about VA, but that can be difficult. This infographic makes that conversation easier to have. Share it with your partners, husband and girlfriends! They will be glad you did!