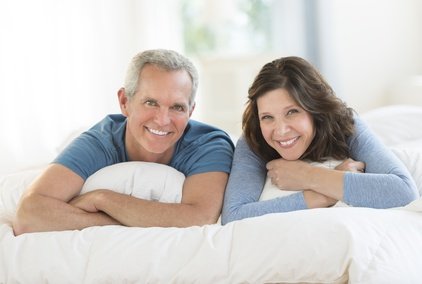 ESTROGEN DEFICIENCY: THE OTHER ED

Joseph, a 60-something executive, presented to my office with bladder health issues. He was accompanied by his devoted wife, Leslie. Now you might wonder why I am talking about a man on a vaginal health blog, but men are very important to consider when we talk about vaginal health and such was the case with Joseph. You see, in addition to bladder symptoms for the past five years, Joseph was also mildly depressed, having difficulty sleeping, and was experiencing erectile dysfunction (ED) along with loss of libido. This all coincided with vaginal dryness associated with his wife’s menopause (five years prior).

I asked Leslie if it would be ok for me to ask her about her vaginal health and sexual life and she welcomed the help. She said that vaginal dryness was her only symptom and this seemed to be getting worse as time went on. Vaginal dryness can worsen if not treated. She said that her relationship was important to both of them and she was so sad that their sexual relationship had ended far too soon but she just could not handle the pain when he penetrated her. She had nowhere to turn, or speak to; she said as she had no sisters and her mother had passed away. She also said this was not something her friends discussed openly.

Sex life ending far too soon is all too common in the face of vaginal dryness. This is yet another taboo subject not only for women but for men too. According to Clarifying Vaginal Atrophy’s Impact on Sex and Relationships (CLOSER) survey: emotional and physical impact of vaginal discomfort on North American postmenopausal women and their partners, most surveyed North American men believed that vaginal discomfort caused their partners to:

Approximately 30% of North American women and men cited vaginal discomfort as the reason they ceased having sex altogether.

Although Joseph was my actual patient, I felt that it was vital to treat both as a couple. Sex is very beneficial and may help people with mood and sleep, some of which were troubles that Joseph was experiencing. For Leslie, I recommended that she try an over the counter personal moisturizer, RepaGyn® daily for two months and then twice weekly to help improve the overall health of her vaginal tissues. The ingredients like vitamin E, aloe vera, and tea tree oil contained in RepaGyn® would help to keep her tissues healthy and youthful.

In my follow up visit with Joseph, at my recommendation, he had been to see his family doctor and had a cardiovascular work up for his ED. ED can be the “canary in the coal mine” for heart troubles and or diabetes. He did have hypertension (high blood pressure) and was now being treated. He also had treatment for his ED and he and Leslie (who was no longer experiencing vaginal dryness after have used RepaGyn® for one month) had gotten themselves back to the bedroom!