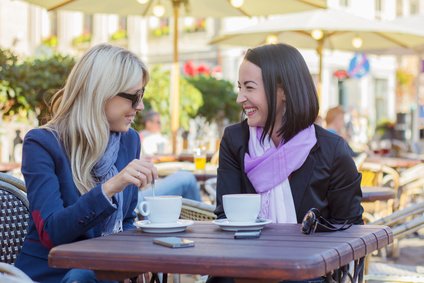 A Sexpert’s Work is Never Done!

I stopped into Tim Horton’s for an iced cap and ran into an old friend.  She had recently separated from her husband and one of their children was having health issues. She and her husband had been having troubles for a while and it was time to move on. In fact, she told me she was there to meet someone. It took a bit for this blonde head to clue in when all of a sudden I realized, as she was scoping the place out, that she was meeting someone for a coffee date right then and there! Aghast, I said, “My goodness… I will leave you to meet your date.” She insisted that I stay as he may not turn up because he was already late.

The man she was meeting was French and so I starting scoping the place out for men whom I thought had that ‘je ne sais quoi’ look. Every man that passed by basically could have been “the one.” My friend who is in her mid forties told me that she had been dating younger men and that they did not understand that things did not happen for her as it did when she was younger. In other words, it took her longer to get aroused than ever before.

We talked about how just because she was in her forties did not mean that arousal/lubrication and orgasm should take longer.  A woman needs to trust fully in order to be vulnerable enough to open up to the most satisfying sex. I asked her if she was experiencing vaginal dryness to which she replied, occasionally. It is not uncommon for vaginal dryness to begin in the forties for a woman and this may decrease the pleasure and make for a longer time to arousal. She laughed when I said that I had some samples in my car that just might help her! I assured her that I would bring a personal moisturizer and a lubricant that may help her in a small bag so as to be discreet. I returned with the loot only to find that my friend’s “Monsieur” had not yet arrived.

I sat down and explained that the personal moisturizer (I gave her a sample of RepaGyn®) was a hormone-free over the counter vaginal ovule that is inserted into the vagina for eight days and then twice weekly. I continued in saying that RepaGyn® will help heal dry, damaged tissue and keep her vaginal tissues moist which may help increase sexual sensation and may bring on arousal a bit sooner. The lubricant, I explained, was to be used during sex that may help with any discomfort.

She was a bit sorry her date was a “no show” but she was happy that we ran into each other as she had learned so much, which would help her in her new dating game. Her new found information would help her to have more satisfying sex and get back to the bedroom.